Pasojoc is an area located high on the side of a mountain in the state of Quiché, Guatemala.  Life in this area is very difficult and very isolated from the outside world.  It is more than a two-hour walk to the nearest market town of Zacualpa.  Pasojoc is a farming area where corn and black beans, the staple elements in their diet, are the major corps.  The Quiché Indians who inhabit this area trace their ancestral roots to the ancient Mayan civilization.  They normally speak an Indian dialect called Quiché - however, Spanish is becoming more common.  Very little money ever changes hands in this area as they live on a barter system.

Hello, my name is Nemora Adalina Portuguez de la Cruz. I was born on April 26, 2016 and I am three years old. I am a basically healthy little girl. I am not attending school because I am still too young, so I spend my time playing with dolls and balls. My favorite colors are red and pink. My favorite animal is the dog. The food that I like to eat the most is grilled chicken. My favorite fruit is the pineapple. I have four brothers and four sisters. Five of my siblings are registered in the feeding program and I come with them. We walk about one hour to get to the feeding program. My father’s name is Ignacio Portuguez and he is a farmer. He works in his own fields. Sadly, my father has some health issues.  He has gone to the hospital and has received medical treatment. but he has not felt any improvement in his health. He has not visited a private doctor because he does not have enough resources to cover it. My mother’s name is Raymunda de la Cruz and she is a housewife. Two of my older brothers are working in a grocery store in Guatemala City; both of them contribute to our family income. We live in our own house made of adobe. The house has two rooms, a separate kitchen and electricity. We do not have running water, so we get it from a natural water source with a hose. My family attends a church named Water Spring of Life.

With much live and many blessings, 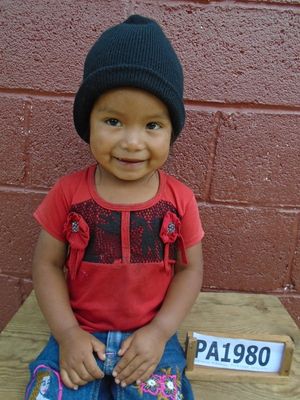