Pasojoc is an area located high on the side of a mountain in the state of Quiché, Guatemala.  Life in this area is very difficult and very isolated from the outside world.  It is more than a two-hour walk to the nearest market town of Zacualpa.  Pasojoc is a farming area where corn and black beans, the staple elements in their diet, are the major corps.  The Quiché Indians who inhabit this area trace their ancestral roots to the ancient Mayan civilization.  They normally speak an Indian dialect called Quiché - however, Spanish is becoming more common.  Very little money ever changes hands in this area as they live on a barter system.

Hello, my name is Florinda Nolibeth de la Cruz de la Cruz. I was born on May 04, 2015 and I am four years old. I am a basically healthy little girl. I am not attending school because I am still too young, so I spend my time playing soccer. My favorite color is yellow and my favorite animal is the rabbit. The food that I like to eat the most is fried chicken. My favorite fruit is watermelon. I have one brother and three sisters. They are also registered in the feeding program and I come with them. We walk about two hours and a half to get to the feeding program. My father’s name is Carlos de la Cruz and he is a farmer. He grows corn and black beans for our consumption. My mother is a housewife. Sometimes, she sells different kinds of herbs in a local market. We also have a small pushcart where we sell fried chicken and fried potatoes. We live in our own house made of adobe with a tin sheet roof and dirt floor. It has two rooms, a separate kitchen, running water and electricity.  My family attends a Catholic church.

With much love and many blessings, 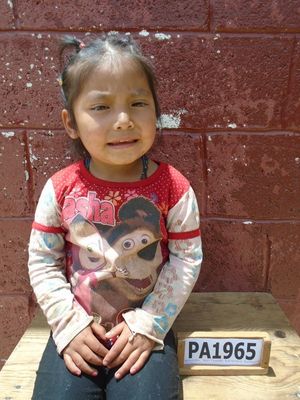