Pasojoc III, where your child lives, is located in an extremely remote area of the mountains in Quiche, Guatemala.  Life in this area is very difficult and very isolated from the outside world.  It is a 3-hour walk to the nearest market town.  The people who inhabit the area are Quiche Indians who can trace their ancestral roots to the ancient Mayan civilization.  They normally speak an Indian dialect called Quiche, however, Spanish is becoming more common.  The climate is basically warm, but it can get very cold at night.  Houses in this area are typically constructed of adobe with tin sheet or tile roofs and dirt floors.  Pasojoc III is an area rich with natural resources.  It is a farming area where the inhabitants grow staples such as corn, beans and other types of vegetables.  Many families also raise domestic animals such as sheep, goats, cows and chickens.  Many of the families travel to the coast for several months each year to find work cutting cane or coffee.  Sadly, many of the children do not go to school because of lack of economic resources and because of the sheer distance they would have to walk to reach school.  As a result, the majority of the people are unable to read or write.  Many of the teenagers leave home at an early age to search for employment in other areas in Guatemala.

Hello, my name is Erlindo Angel Luis.  I was born on January 3, 2014 and I am five years old.  I am a healthy child.  I have two brothers.  One of them also attends the feeding program and we walk 15-20 minutes to get to the program here in Pasojoc III.  We have to walk 1 ½ hours to get to the program in Pasojoc I.  My father’s name is Horacio and he is working in the United States doing different types of work.  He maintains communication with us.  My mother’s name is Candelaria and she is a housewife.  She also has some domestic animals that she sells when necessary.  Our house is made of cement block with a ceramic floor.  The roof is constructed in such a way that an additional level could be added later on.  We have five rooms and a separate kitchen.  We have water and electricity.  My favorite color is black and my favorite animal is the dove.  The foods that I like most are watermelon and fried chicken.  I am not in school yet, so I spend my time playing soccer.  My family attends a Charismatic church.

With much love and many blessings, 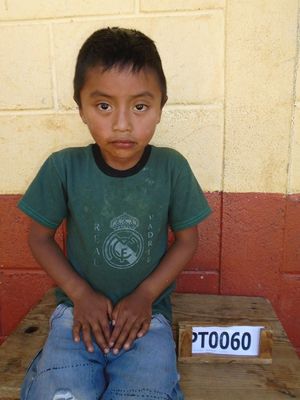